The final 5 kilometre (3.1 mile) section of the A6 Randalstown to Castledawson Dualling Scheme has opened to live traffic.

Infrastructure Minister Nichola Mallon has opened the final 5 kilometre (3.1 mile) section of the A6 Randalstown to Castledawson Dualling Scheme. This is a significant milestone in the delivery of the A6 Flagship project. 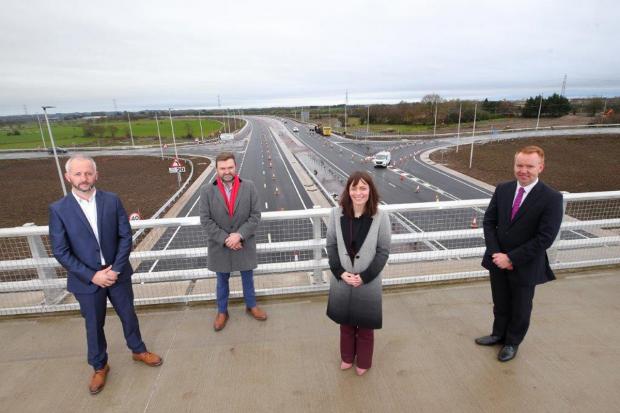 The entire £189 million scheme to upgrade 14.7 kilometres of the A6 North Western Transport Corridor between Randalstown and Castledawson is almost complete. In August 2019 the first phase of the scheme between the M22 at Randalstown and Toome was opened, and from today traffic can use a further 5 kilometre stretch of the new dual carriageway between Toome and Castledawson. This follows weekend works to link the new dual carriageway with the existing road network.

Welcoming the progress on the scheme Minister Mallon said:

“The A6 is a strategically important route, as it connects the North West to Belfast and beyond.  The construction of this Flagship scheme will improve connectivity, contribute to the economic development of the area and bring long term benefits to road users and local communities.  Crucially it will also improve road safety and improve regional balance.

“Last August the first 7.5 kilometre stretch of new dual carriageway was completed and this has already brought significant benefits for road users, by enabling shorter, safer and more reliable journey times.  The opening of a further 5 kilometres of new dual carriageway to traffic is a massive step forward in the project and welcome news for the 20,000 vehicles using the route each day.

“Delivering extensive improvements to the roads infrastructure involves the cooperation and understanding of the local community. I acknowledge the impact that this scheme has had on residents, landowners, businesses and road users. The good news is that the end is in sight and we look forward to the full completion of the scheme in early 2021.

“I would like to thank all those impacted for their continued patience and support during the works.”

As well as successfully reaching this significant milestone, the A6 Dualling Scheme also has recently received an International CSR Excellence Award for the teams efforts in Environmental Habitat and Diversity enhancement. The team were recognised for their excellent culture of environmental and safety awareness and the safeguarding of many areas of environmental sensitivity including Lough Neagh and Lough Beg Special Protection Area (SPA) and numerous watercourses.